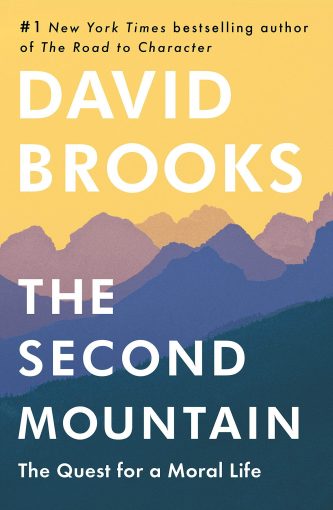 David Brooks has been a columnist for the New York Times newspaper, one of the world’s most prominent newspapers, since 2003. The Second Mountain is Brooks’ 5th book. The book immediately before it, The Road to Character, introduced some of the ideas expanded on in The Second Mountain.

Summary of  “The Second Mountain: The Quest for a Moral Life”, by David Brooks, 2019.

Summarized by George Jacobs of HealthPartners.sg

In the earlier book, Brooks talks about two selves. One self cares about external appearances: what we need to do to impress others. In Singapore, this first self seeks after the 5 Cs: Cash, Car, Credit card, Condominium, and Country club membership. Such an emphasis on materialism and individualism drives people to ambitiously jump into the rat case, to compete to separate themselves from others in order to rise as high as possible, competing first at school and then competing to get to the top of corporate and other ladders.

The other self Brooks talks about focuses on the internal, not the external, people comparing themselves not to others but to their own selves. Rather than materialism and individualism, this second self emphasises fidelity to one’s values and cooperation with others. Measures of success involve helping others, not surpassing them. The Cs of this second self include Care, Compassion, Contemplation, Community, and Commonality. Independence, while still important, receives less airtime than interdependence.

In The Second Mountain, the two selves are now two mountains. The first self is the first mountain. Many people spend their entire careers, indeed their entire lives, climbing this mountain. On the second mountain, people still must meet the needs of themselves and their families, but their concentration centres on what they can do for the common good. As the saying goes, “A rising tide lifts all boats”.

In between the two mountains lies what Brooks calls the “valley of bewilderment or suffering”. People were climbing the first mountain or maybe they even had a place near the top of that mountain. Then, something happened to them or a loved one: maybe a serious illness, an addiction, a scandal, a revelation that causes them to re-examine their lives. As a result, these people no longer find satisfaction living by first mountain values.

People in the valley between the two mountains face a choice. They can retreat back to the first mountain. After all, this is the way of life they know best; they know how to play the game on the first mountain and are comfortable there. Or, they can try the second mountain. Initially, this may feel uncomfortable. Friends, family and former colleagues may question their choice.

An outstanding example of switching from the first mountain to the second mountain is Loh Yeow Nguan, a founder of HealthPartners.sg, a Singapore-based social enterprise. Yeow graduated with a degree in architecture from National University of Singapore, and soon found a job at a well-regarded architecture firm. He was on his way up the first mountain, with the accompanying socially-approved lifestyle, for example, eating a great deal of meat.

However, the clash between Yeow’s own values and first mountain values, such as the way architecture was done, became too strong. As a result, although it was still early in his career, Yeow did a major pivot and decided to devote himself to a second mountain life, working (often as a volunteer) for non-profit organisations, such as Vegetarian Society (Singapore) and Kampung Senang Charity and Education Foundation. He gave up meat and started following a whole food, plant-based diet, as part of living a very simple lifestyle. Climbing the mountain to money, power and fame no longer attract Yeow. His email address – ‘iamyou’ – encapsulates his values.

Changing mountains from first to second does not have to mean changing the company/organisation a person works for or changing careers. Teachers can continue in the same school, just as Yeow could have stayed as an architect. Maybe on the first mountain, teachers’ focus lay with being promoted to principal, boosting students’ exam scores or keeping students under tight control. On the second mountain, the same teachers can focus on creating an environment of cooperation among teachers and students, and on encouraging students to pursue their interests and talents. Similarly, delivery drivers can continue driving but instead of working for a company that delivers cigarettes, they can work for a company that delivers healthy meals, or scientists can switch to a lab that develops cell-based (also known as clean meat or cultivated) meat.

The difference between first and second mountains involves more than what people do in their jobs; it also involves how they relate to others. On the first mountain, face and respect from others matter greatly. On the second mountain, service to others matters most. The question asked is not, “Am I being treated with respect?” The question is, “Are we achieving our common goals, goals that are larger than any person, just as the second mountain stands so much higher than the first?” Thus, living a second mountain life extends beyond the jobs people do and includes all aspects of their lives. For instance, while first mountain relationships are thin – easily forgotten, easily disappearing, full of envy – second mountain relationships are thick: enduring, reliable, supportive, full of admiration.