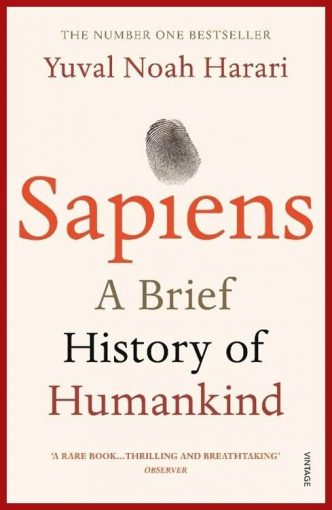 100,000 years ago, at least six human species inhabited the earth. Today there is just one. Us. Homo sapiens. How did our species succeed in the battle for dominance?

As a vegan, I’m curious when I see a book or other work, such as film or play, that talks about vegetarianism/veganism or is written/created by a vegan. For example, in 2016, a Korean novel titled ‘The Vegetarian’ – https://en.wikipedia.org/wiki/The_Vegetarian – was on the Time magazine list of best books of the year. So, I had to read it. [Warning – I was disappointed; it’s mostly about mental illness, not vegetarianism.]

Another novel I read was ‘Here I Am’ by Jonathan Safran Foer – https://en.wikipedia.org/wiki/Jonathan_Safran_Foer, the vegan author of best-selling fiction (his first two novels had become Hollywood movies), and Foer also wrote an outstanding non-fiction book, ‘Eating Animals’, which provides fact-checked, extensively detailed information on animal agriculture, as well as a must-read introduction about how his grandmother’s diet was guided by principles, not momentary desires.

However, ‘Here I Am’ has scarcely any mention of vegan themes or any significant vegan characters. At the same time, what may be noteworthy in the novel is the final scene in which the protagonist, a U.S. professional in his 40s, with great sadness, takes his family’s animal companion, a dog named Argus, to the vet to be put him to sleep. Argus has endured many years of declining health, through which the protagonist has been a loving companion.

So, ‘The Vegetarian’ and “Here I Am’ weren’t what I was, perhaps unrealistically, hoping for. Undeterred, when I heard about ‘Sapiens’, a piece of non-fiction by a vegan author, Yuval Noah Harari, I was tempted, and when I heard that this 2016 book is on the best seller list in SG even in 2019, I had to read it. All the National Library Board’s hard copies were on loan, but I managed to borrow a soft copy via NLB’s Overdrive service.

The book looks at the past, present, and future of humans. Of course, any account of the distant past as well as the future of the Earth and its inhabitants is necessarily built to some extent on speculation. Much of Harari’s speculation was new to me.

To give some context for ‘Sapiens’, we now live in a geologic age which some call the Anthropocene, with anthro meaning human and cene meaning geological period. Therefore, the use of the term anthropocene is emblematic of humans’ increasing power to impact the planet and its inhabitants.  In the face of humans’ rise, the main idea of this book seems to be to teach present humans to be more humble. For example, the title of Chapter 1 of the book, “An animal of no significance” refers to us.

Indeed, the Big Bang took place 14 billion years ago, creating matter, energy, time, and space. Earth was formed about 4.5 billion years ago, and the first organisms appeared about 3.8 billion years in the past, and it was only about 2.5 million years ago that various human species began to appear. Maybe by recounting this history, Harari wants to us see that the planet and the rest of the universe seemed to have survived just fine without us for billions of years.

Humans are part of the family of organisms known as great apes, which includes chimpanzees and gorillas. Part of our family of great apes is the genus homo, meaning humans. Homo sapiens (sapiens can be translated as wise – of course, we named ourselves LOL) was just one species in this genus. Just as today, the Earth is at the same time home to multiple species of butterflies, so too was the Earth was simultaneously home to multiple species of humans.

Now, we are the only surviving member of our genus. Others included Homo habilis, Homo erectus, Homo naledi, Homo heidelbergensis, Homo denisova, Homo ergaster, and Homo neanderthales. Why are sapiens still alive while the other members of our genus survive only in paleontologists’ records? It’s not clear, but it’s not because we have the largest brains in our genus. Neanderthals and maybe others had larger brains. Also, there may have been interbreeding amongst human species; so, those other species of humans may survive within us.

Just as human uniqueness and superiority were threatened by the discovery that the Earth is not the centre of the solar system and that humans are related to our fellow primates, not a separate creature distinct from the “animals,” so too might our ties to other human species remind us that we aren’t so special.

Humans are now at the top of the food chain. We are the apex predator, hunting whatever animals we want, even genetically modifying plants and other animals, but earlier, we were near the middle of the food chain, hunting only animals smaller than us, along with gathering plants. “The most important thing to know about prehistoric humans,” Harari writes, “is that they were insignificant animals with no more impact on their environment than gorillas, fireflies, or jellyfish.”

Harari speculates that a key use to which earlier sapiens put their stone tools was to crack open the bones of dead animals so as to eat the marrow. These dead animals, such as antelopes, had been hunted down by top predators, such as lions. After that, sapiens needed to wait until next the bones of the deceased had been picked clean by other, superior, animals such as jackals.

What happened so that after a million+ years in relatively powerless obscurity, sapiens were able to climb that ladder to create today’s Anthropocene, where we exercise so much power. Between 70,000 and 30,000 years ago, perhaps due to mutations, what Harari calls a “Cognitive Revolution” occurred among sapiens, allowing a major leap in our ability to communicate and innovate. As to communication, other animals, even insects, have language.

The Power of Stories: Whether True or False

What made the language of these post-cognitive-revolution sapiens special was the ability to tell stories (in a broad sense of the word) with language. These stories included those in myths, history, and religions. All these stories allowed people who might never meet in person to nevertheless form large, coordinated units, far beyond the size of an extended family of, for example, chimpanzees.

Harari writes that, “Any large-scale human cooperation – whether a modern state, a medieval church, an ancient city, or an archaic tribe – is rooted in common myths that exist only in people’s minds.” For instance, modern limited liability corporations are “legal fictions”. These stories that humans create can change, and conflicting stories can co-exist. For example, many people believe stories positing that animal-based foods are necessary for humans to achieve optimal health, whereas a growing number of people believe stories urging us to move towards plant-based diets.

Whether a story is true or false (even if that is knowable) does not necessarily impact the story’s power. In a May 2019 commentary in the New York Times [https://www.nytimes.com/2019/05/24/opinion/why-fiction-trumps-truth.html], Harari wrote:

Planet Earth was conquered by Homo sapiens rather than by chimpanzees or elephants, because we are the only mammals that can cooperate in very large numbers. And large-scale cooperation depends on believing common stories. But these stories need not be true. You can unite millions of people by making them believe in completely fictional stories about God, about race or about economics.

Due to the Cognitive Revolution, our increased brain power allowed sapiens to be the agents of change in our world and that of the Earth’s other inhabitants. During the large majority of sapiens’ time on the planet, we were hunters and gatherers. It is only recently that we sapiens grew / raised our own food, and only the past 200 years that most of us left food production to others while we worked in factories, schools, offices, etc. Has our basic psychology changed since our time as hunters and gatherers? Harari’s answer is No. This helps explain the epidemic of obesity and why so many people cannot resist sweet, oily foods.

The Present and Future

Yes, sapiens have ascended to the highest pedestal, but our supremacy is under threat. A major focus of the second part of the book involves Harari explaining why technology renders wrong or irrelevant cherished concepts about the value of our lives. These concepts include the beliefs that humans have free will, and that democracy and human rights are beneficial. I don’t recall rights for nonhuman animals being mentioned in the book.

After ‘Sapiens’, Harari wrote ‘Homo Deus: A Brief History of Tomorrow’ which predicts that Homo sapiens will be superseded by a new species, Homo deus (deus means god), who will be able to process data much better than us, thereby rendering us sapiens irrelevant. Harari warns, “When cars replaced horse-drawn carriages, we didn’t upgrade horses – we retired them. Perhaps it is time to do the same with Homo sapiens.”

Can we save ourselves from being demoted in the hierarchy of species, or will the world be better off with sapiens in a less dominant position? Will this new Homo deus species be kinder to nonhuman animals, will it protect the environment better than we sapiens have?

No one knows the answers to all these questions, but while we still live in the Anthropocene, let’s do our best. And, we already are doing some great things, such as using technology to spread the message of how to live greener, kinder lives, and harnessing technology to produce greener, kinder products, such as plant-based meat and clean meat. Let’s slow the pace at which we are wiping out species – https://www.vox.com/science-and-health/2019/5/7/18531171/1-million-species-extinction-ipbes-un-biodiversity-crisis – and maybe the new Homo deus species will decide to be nicer to us. 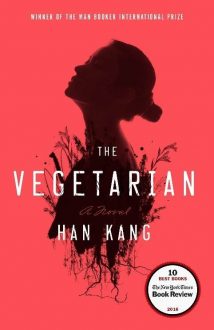 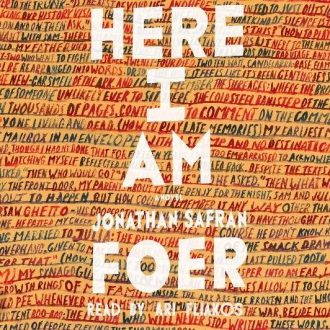 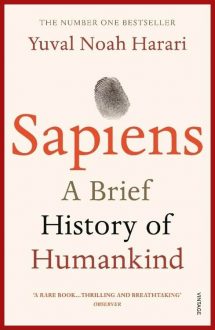 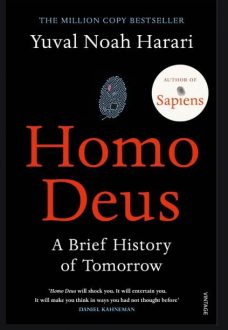