Review : “Vegan for Life: Everything You Need To Know To Be Healthy on a Plant-Based Diet – 2nd edition (2020)” by Jack Norris, RD and Virginia Messina 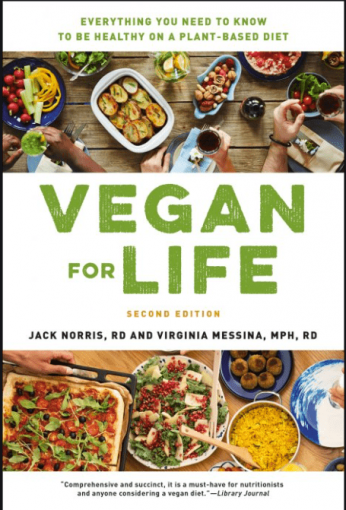 Jack Norris, RD, is a vegan dietitian, the cofounder and executive director of Vegan Outreach, and has been elected to the Animal Rights Hall of Fame. He is a widely-sought speaker on vegan nutrition. Visit his website at jacknorrisRD.com.
Virginia Messina, MPH, RD, writes about vegan and vegetarianism for both consumers and health professionals and serves on the advisory boards of One Step for Animals, the Vegan Trade Council, Oldways Vegetarian Network, Better Eating International, and True Health Initiative. Learn more at theveganrd.com.

Review of “Vegan for Life: Everything You Need To Know To Be Healthy on a Plant-Based Diet”

This book is full of clearly written, extensively detailed nutrition information. Indeed, the authors fulfill the promise given in the book’s subtitle: “Everything You Need To Know To Be Healthy on a Plant-Based Diet.” ‘Everything’ includes lists of foods, menus, and diet tips for key nutritional needs.

But the main purpose of the book is not to teach human nutrition.

The authors emphasize that vegan nutrition can be easy: “A vegan diet isn’t difficult; it’s just a different way of meeting nutritional needs.” The book focuses on nine nutrients that vegans and the vegan-curious often wonder about: protein, calcium, iron, zinc, iodine, alpha-linolenic acid, and vitamins B12, A, and D. In addition to chapters on those nutrients, other chapters delve into making the transition to vegan, soyfood, pregnancy and breastfeeding, children and teens, people over 50, sports nutrition, and a compassionate approach to weight and dieting.

But the main purpose of the book is not to teach human nutrition.

So, what is the authors’ main purpose? This is revealed in the book’s dedication: “to all farmed animals, and to those who work to end their suffering.” Jack Norris and Virginia Messina explain that they are long-time vegans who became nutrition professionals to empower people to move away from animal based foods: “We want you to have the best nutrition advice possible, because a vegan diet isn’t a realistic choice if you aren’t meeting nutrient needs or eating in a way that supports optimal health.”

And, if we aren’t healthy vegans, we can’t be effective ambassadors for veganism, even though, “A vegan diet is the world’s most simple solution to a host of complex problems.”

Fact: All plant sources of protein contain all the essential amino acids. The death-by-research of the old belief that vegans need to do food combining is another example of how modern science supports the efficacy of vegan diets.

At the same time, Vegan For Life debunks something that many vegan activists, myself included, have said, “I’ve never heard of anyone, outside of someone suffering malnutrition, having a protein deficiency.” The authors clarify: “Diets that are marginal in protein—not quite deficient, but not quite optimal—can result in loss of muscle mass, poor bone health, and compromised immunity.” Furthermore, seniors may need extra protein.

“You can build healthful and appealing vegan meals around convenience foods and easily prepared dishes. You can be a happy, healthy vegan without ever cracking open a cookbook.” Yes, people need time to adjust and to learn new foods, but being vegan is eminently doable, especially with all the new vegan foods flooding the market these days.

At the same time that Vegan For Life addresses this myth among meat eaters, the authors also challenge the view held by some vegans that only a completely whole foods diets will work for vegans. While the book encourages whole, un- or lightly-processed foods, Norris and Messina also see a place for processed foods. Similarly, they see no advantage to diets weighted heavily towards raw foods.

Many people do experience short- and long-term health benefits from becoming vegan, and this is supported by a growing body of research. However, if your health “benefits are smaller than you expected, it doesn’t mean your vegan diet doesn’t work. A vegan diet always works because it always reduces your contribution to animal exploitation and shrinks your carbon footprint. There is no other diet that can make those promises. Focusing on these guaranteed benefits of veganism makes it easy to embrace it as a long-term commitment.” I love that quote!

Myth #4: Going vegan is almost impossible because of all the animal ingredients hidden in food processing, such as bone char in white sugar. So, why try?

Fact: “Avoiding these minute animal ingredients won’t make your diet any healthier. Nor will it lessen animal suffering or help protect the environment in any meaningful way. The only thing it will do is make your vegan diet more restrictive, time-consuming, and difficult to follow.”

Fact: “Eating beans and grains directly instead of feeding them to farmed animals conserves land, water, fertilizer, and fossil fuel.”

Myth #6: We know everything we need to know about nutrition. The only task now is to disseminate this knowledge.

Fact: There is still a huge amount we do not know about nutrition, and “experts” who do not admit our species’ ignorance are not to be trusted. Norris and Messina do admit that scientific knowledge is sometimes lacking, for example: “A lot more research is needed before any definitive conclusions about the role of soy in preventing and treating prostate cancer can be made.”

Myth #7: Soy foods bring about a host of health problems.

Fact: Some soy foods, such as tofu, are more processed than others, such as tempeh and edamame, but the research supports a belief that all soy foods are health-promoting, for example, “The World Cancer Research Fund International suggests that soyfoods consumption might possibly improve survival in women who have had breast cancer.”

Myth #8: There is controversy among nutrition professionals as to whether vegans should take B12 supplements and/or eat foods specially fortified with B12.

Fact: “Among nutrition professionals (including those of us who specialize in vegan diets), there is no controversy at all. All vegans need to take a vitamin B12 supplement or consume foods that are fortified with this nutrient.” Older people, whether or not they eat meat, can suffer B12 deficiency, and the B12 in supplements tends to be more bio-available than the B12 in animal foods.

Fact: “[T]here is a tremendous amount of evidence that humans evolved eating some animal products.”

To sum up, Vegan for Life (2nd edition) is a book that belongs on every vegan and vegan wanna-checkout’s bookshelf (or hard drive in the case of the e-book or audio book versions).

To continue learning from Norris and Messina, visit Jack’s Vegan Health website – https://veganhealth.org/ website (now a collaborative project including Ginny and such other experts as  Reed Mangels and Taylor Wolfram). Vegan Outreach, the hyperactive organization that Jack co-founded and leads, has a very useful project, 10 Weeks to Vegan: https://veganoutreach.org/mc10w/. Also highly recommended are Ginny’s other books, including Never Too Late To Go Vegan and Vegan for Her, not to mention her blog, The Vegan RD: https://www.theveganrd.com/

Returning to the authors’ purpose for writing Vegan For Life, let me leave you with more of their words of animal-focused wisdom: “Good diets are good advocacy.”