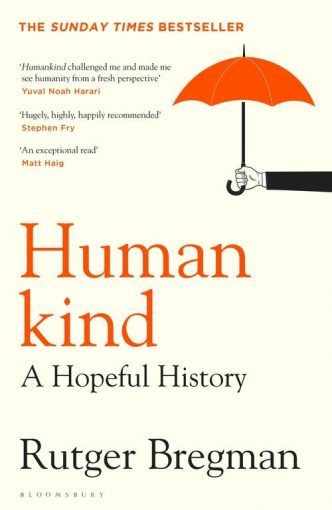 Rutger Bregman, a historian and writer at the Correspondent, is one of Europe’s most prominent young thinkers. His last book, Utopia for Realists, was a Sunday Times and New York Times bestseller and has been translated into thirty-two languages. He lives in Holland.

A summary of “Humankind: A hopeful history” by Rutger Bregman, 2020, Bloomsbury.

“Most people, deep down, are pretty decent”

Meat eating fits with a view of nature in which humans need to conquer nature; nature is mostly evil. We humans win; the nonhuman animals lose; the evil animals win and the humans lose. In contrast, plant-based, herbivore diets fit with the view that we humans should try to co-exist peacefully with the other animals. The animals are basically good.

Rutger Bregman is a historian who became a journalist and book author. His central message is that people are mostly good and should usually be trusted to do good. For example, he supports universal basic income.

In the book’s title, “kind” in “humankind” has the double meaning that humans, most of the time are kind to each other; he doesn’t discuss whether humans are kind to other animal species. Bregman spends much of the book attempting to debunk studies, scientific books,  fiction, and interpretations of events that have painted humans as selfish, extrinsically motivated, and naturally warlike.

Let’s begin with Lord of the Flies, by Golding, winner of the Nobel Prize for Literature. In the book, a group of preadolescent boys are stranded on an uninhabited island. True to the stereotype of humans as having only a thin veneer of civilization over our savage interiors, the children turn on each other and establish a ramshackle society worthy of a cruel dictatorship. To counter this, Bregman has unearthed a true-life story of a group of boys who were shipwrecked for 15 months and established a well-ordered harmonious society (Bregman, 2020).

Bregman also questions two famous studies frequently cited to support the thesis that humans can’t be trusted to act decently. In Milgram’s (1963) obedience study, participants followed the experimenter’s orders and delivered what they believed were increasingly strong electric shocks to other people. In reality, no shocks were administered, but the fact that the research participants were willing to “harm” others at the experimenter’s command was seen as a confirmation that the acts of guards at WWII concentration camps were a true indication of typical human thinking.

Similarly, Zimbardo and colleagues (Haney, et al., 1973) found that mistreatment of the less powerful was a phenomenon that could occur among any people where a power gap existed, rather than being due to any special traits of people who ended up in life as prisoners or took jobs as prison guards. In this study, participants were randomly assigned to be either prisoners or guards in a prison constructed especially for the research. Although the study was designed to last two weeks, sadistic treatment by the “guards” emerged on the first day and became so bad that the study needed to be stopped after only six days.

These two studies, along with The selfish gene (Dawkins, 1976), one of the best-known science books of the 20th century, are still cited to justify a negative view of human nature. However, as often happens in science, the pendulum swings, and now, one-fifth of the way through the 21st century, the two studies have been broadly questioned  and  refuted (e.g., Gray, 2013; Hollander, 2015), as has much of the evidence Dawkins used to support his claims. It should be emphasized that Bregman does not claim that most humans are angels, only “pretty decent”.

The book’s most eye-opening chapter begins with a description of selective breeding of silver foxes, a notoriously fierce species, to develop a group of silver foxes who were friendlier. Not only were these foxes friendlier, they also developed childlike physical characteristics similar to those of domesticated dogs: drooping ears, shorter snouts, thinner bones, and males looking more like females. Plus, they produced fewer stress hormones, more “happy” hormones, serotonin and ocytocin, and, at least in some ways, were smarter.

Bregman suggests that homo sapiens differ from Neanderthals in ways both physical and psychological that are similar to the differences between the friendly silver foxes and the control group who remained fierce (Hare, 2018). Bregman believes these changes in humans occurred about 50,000 years ago when Neanderthals disappeared and human culture leapt forward to include sharpening stones, canoes, and cave paintings. We became weaker, our brains were smaller, but we were better adapted to our environment, blessed with what Bregman labels our “true superpower,” our superior ability to do social learning. His analogy is “If Neanderthals were a super-fast computer, we were an old-fashioned PC – with wifi. We were slower but better connected.”

Based on his generally positive view of people, Bregman offers ten suggestions. What strikes me about these suggestions is their overlap with concepts from two prominent theories. Positive Psychology (Seligman, 2011) highlights our need for PERMA (Positive emotion, Engagement, Relationships, Meaning, and Achievement). Social Interdependence Theory (Johnson & Johnson, 2009) is a key theory underpinning the use of cooperative learning in which students sometimes learn together.

Bregman’s first suggestion is to assume the best about other people. This resonates with Seligman’s emphasis on building relationships with others as an essential aspect of a flourishing life. We cannot build close relationships if we constantly worry that others are out to cheat us. Yet, we need to accept that fact that sometimes we will be cheated, which Bregman calls “a small price to pay for the luxury of a lifetime of trusting other people.”

A second suggestion by Bregman is to look for win-win solutions. This is similar to the concept of positive interdependence in cooperative learning, i.e., that our outcomes are correlated with the outcomes of others. In other words, we sink or swim together. This interdependence applies not just among humans but with our fellow animals as well. For example, human consumption of other animals for food, means that billions of chickens, fishes and others die horrible deaths in the grip of the factory farming system, while human health suffers from the harmful substances in animal-based foods, such as saturated fats and plastics (Miranda  & de Carvalho-Souza, 2016).

One of Bregman’s suggestions that was new to me was to replace the Golden Rule with the Platinum Rule. The Golden Rule, of course, is to do onto others as we would want them to do onto us. However, perhaps not everyone will want what we want. This where the Platinum Rule offers an improvement; we should ask people what they want. This fits well with student-centered learning, an approach to education that resonates with cooperative learning. In student-centered learning, students have input into what and how they learn (Jacobs, Renandya, & Power, 2016).