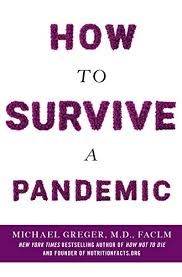 A founding member and Fellow of the American College of Lifestyle Medicine, Michael Greger, MD, is a physician, New York Times bestselling author, and internationally recognized speaker on nutrition, food safety, and public health issues. He has lectured at the Conference on World Affairs, testified before Congress, and was invited as an expert witness in the defense of Oprah Winfrey in the infamous “meat defamation” trial. In 2017, Dr. Greger was honored with the ACLM Lifestyle Medicine Trailblazer Award. He is a graduate of Cornell University School of Agriculture and Tufts University School of Medicine. His first book How Not to Die became an instant New York Times Best Seller. He has videos on more than 2,000 health topics freely available at NutritionFacts.org, with new videos and articles uploaded every day. All proceeds he receives from his books, DVDs, and speaking engagements is all donated to charity. –This text refers to the paperback edition.

Review of “How to Survive a Pandemic” by Michael Greger, M.D. FACLM, Published by Bluebird Books for Life, 2020.

Currently, Dr Michael Greger devotes his considerable energies to the NutritionFacts.org non-profit constellation of website, social media, books, talks, and videos, which focuses on the impact of food on health. However, for How to Survive a Pandemic, he returns to his roots as an infectious disease specialist. For instance, his third book, before his best-selling How Not to Die and How Not To Diet, was Bird Flu: A Virus of Our Own Hatching.

How to Survive a Pandemic has six parts. The clear message of Part I, Storm Gathering, is that humans greatly underestimate the impact of viruses. We mistakenly view diseases such as the flu as mere inconveniences. To make this point, Dr Greger opens with a quote from Dr William Osler, a distinguished medical educator of the early 20th century: “Humanity has three great enemies: fever, famine and war; of these by far the greatest, by far the most terrible, is fever.”

Dr Greger delivers a chilling account of the horrors of the so-called Spanish Flu of 1918-1919, which appears to have actually begun when a virus on a chicken farm in the U.S. infected troops who spread the disease elsewhere when they were transported to Europe to fight in World War I. While 20 million soldiers and civilians died in that war, at least 50 million perished from the disease. Yet, which is featured in the history books? Until COVID-19, had you ever heard of the world’s worst medical catastrophe ever, a pandemic that would be more accurately called the “Chicken Flu/U.S. Flu of 1918-1919”?

Part II of How to Survive a Pandemic – When Animal Viruses Strike – continues the theme of humanity greatly underestimating the deadly force of infectious diseases. “In 1948, the U.S. Secretary of State pronounced that the conquest of all infectious diseases was imminent. Twenty years later, victory was declared by the U.S. Surgeon General: ‘The war against disease has been won.’”

No such declaration of victory has been made lately. In fact, since 2012, more scientific journal articles have been published on emerging diseases than were published in the previous 100 years. And, almost all of these diseases have come from the animal world.

That’s the past bad news. The future bad news is that there appear to be many more animal diseases capable of jumping to humans. Dr Greger quotes a WHO expert as stating, “If you look at the animal kingdom—from goats, sheep, camels, poultry, all fish, just about any animal you can name—they [each] have probably 30 or 40 major diseases. So the possibility for exposure is huge.”

Part III of How to Survive a Pandemic – Pandemic Preparedness – asks whether once a virus of pandemic potential has emerged, can it be stopped? The answer is Yes, on paper, a pandemic can be stopped, but not in the real world. Dr Greger quotes a leading pandemic expert from the northern U.S. state of Minnesota, Dr Michael Osterholm, “We have as much chance of stopping a pandemic as we would of putting a curtain around Minnesota and keeping out winter.”

Part IV of the book is Surviving the COVID-19 Pandemic. First, some background. Three features of recent pandemic viruses that make them so deadly and enable them to spread so easily are, first, they are new to humans, so we have not built immunity. Second, they spread via our respiratory tract. Third, they spread before their hosts exhibit symptoms, so people with the virus are already spreading the virus before anyone knows they have it. As to when, how, and if COVID-19 will ever go away, Dr Greger cautions that the virus is already mutating, and who knows where that might lead.

The fifth of the book’s six parts turns toward the future: Surviving the Next Pandemic. This part ends with a dire warning by WHO expert Klaus Stöhr, “The objective of pandemic preparedness can only be damage control. There will be death and destruction.”

On a more positive note, Dr Greger offers detailed and, as is his wont, well explained, lists of what we can do in advance of the next pandemic, a disaster Dr Greger sees as inevitable. These lists include the food and other supplies people will need, as well as the behaviors to follow, with hand cleanliness, with soap and water or with hand sanitizer, at the top of the list.

During the current COVID-19 pandemic, as with previous contagions, part of preparation should include working towards equality. Examples of inequality include (a) during the 1918 pandemic, hospitals in the U.S. city of Baltimore were closed to African Americans, and (b) during the current contagion, billions of people lack even the basic clean water needed to wash their hands.

The book’s final part is Preventing Future Pandemics. Dr Greger’s view is that we cannot prevent humanity being visited by more pandemics; all we can do is to try to make those pandemics less severe by preventing superstrains. How? Dr Greger quotes Hippocrates: “Extreme remedies are most appropriate for extreme diseases.”

In the modern context, the extreme diseases are pandemics and the “extreme” remedy that Dr Greger suggests involves stopping our horrendous interference in the lives of non-human animals, in particular using them for food. Fortunately, recent years have seen an explosion of meat alternatives, with such products now being produced even by the same companies which slaughter animals.

I’m a big fan of Dr Greger and the large, impressive team at NutritionFacts.org. One suggestion to Dr Greger is to make his books, etc. even less U.S.-centric. While I don’t doubt that the majority of his readers will be in the U.S., people these days are trying hard to appreciate that the lives of others different from themselves – whether the differences involve race, religion, nationality, sex, sexual preference, species, etc. – do matter. This appreciation promotes interest in learning about the lives of others.