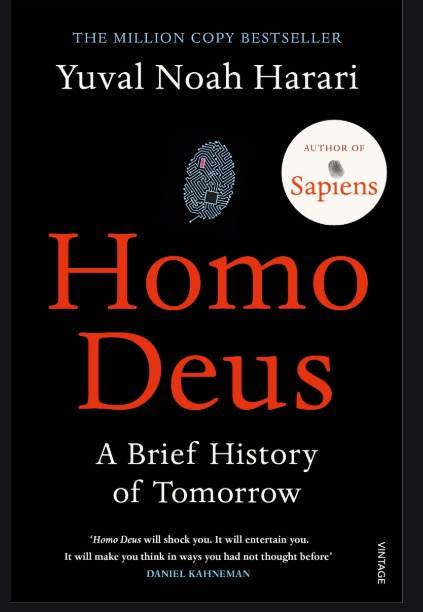 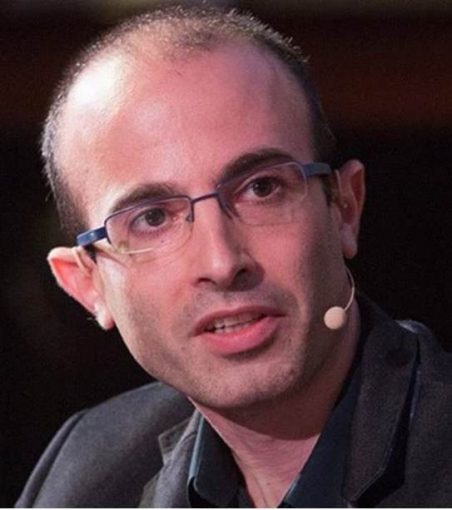 Yuval Noah Harari, author of the critically-acclaimed New York Times bestseller and international phenomenon Sapiens, returns with an equally original, compelling, and provocative book, turning his focus toward humanity’s future, and our quest to upgrade humans into gods.

This book follows Sapiens: A Brief History of Humankind by the same author, Yuval Noah Harari (reviewed here https://animalallies.sg/uncategorized/reading-while-vegan-review-of-sapiens/). Surprisingly, there is substantial overlap between the books, although they are sufficiently different to merit reading both. Sapiens focuses more on Homo sapiens’ past.

Homo sapiens are our species. Homo means human, and sapien means wise. Deus means god, and Harari gives the name Homo deus to the species that is currently developing as an improvement on Homo sapiens.

This second book by Harari contains three parts. Part One is titled Humans Conquer the World, and in that part, two points stood out to me. First, humans are moving towards overcoming three main scourges which over thousands of years have taken so many lives: famine, disease, and violence. Harari is quick to point out that all three still exist, especially in poor countries – https://www.nytimes.com/2019/06/12/opinion/guatemala-malnourished-children.html – but, overall, they are on the wane, and a path seems to exist for significant further reduction. As a result, and with continued scientific advances, human lifespans could double and more.

A second way that humans have conquered the world involves our rise from an insignificant animal tens of thousands of years ago to our current dominant position compared to other animals. To me as a vegan, Harari’s account of human’s thorough-going, tragic domination of the planet’s other animals was the most memorable segment of the book, and even though I have read related accounts multiple times, Homo Deus offers new information.

For instance, the data presented on the preponderance of domesticated animals (farmed animals and companion animals) versus wild animals were striking (see Table 1).

Furthermore, the number of wild animals is declining, while the number of domesticated animals and humans is increasing. Plus, at least in the U.S., while their wild brethren disappear, more than 50% of dogs and cats are overweight.

Harari maintains that when humans were hunter/gatherers, we saw ourselves as just a part of nature, not as separate and above the other animals. Nowadays, the majority view is that other animals are different from and inferior to humans. Even labelling humans as animals seems strange or insulting to many people.

Fortunately, these attitudes are changing. Harari sites the Cambridge Declaration on Consciousness, authored in 2012 by well-known cognitive scientists. The Declaration in part states: 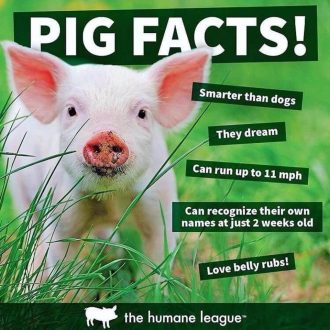 Ironically, recognition of non-humans’ cognitive similarities with humans has in some cases increased the animals’ suffering, as they are now used to test psycho-active drugs. For example, rats are subjected to tests of antidepressant drugs. In one test, researchers inject one group of rats with an antidepressant and the other group with a placebo. All the rats are then, one at a time, thrown into individual glass tubes, and if the antidepressant works, those who received it will struggle longer before giving up.

So, how did Homo sapiens go from being nobodies among the animals to achieving global supremacy? Here’s Harari’s explanation:

Homo sapiens are the only species on earth capable of cooperating flexibly in large numbers. … Bees cooperate in very sophisticate ways, but they cannot reinvent their social system overnight. … Social mammals such as elephants and chimpanzees cooperate far more flexibly than bees, but they do so only with small numbers of friends and family members. … This concrete ability [of humans to cooperate flexibly in large numbers] – rather than an eternal soul or some unique kind of consciousness – explains our mastery of planet Earth.

Part Two of Homo Deus – Homo Sapiens Give Meaning to the World – offers clues as to how vegans might go about curtailing some of the injustices we humans commit against nonhuman animals. First, stories are powerful. One of the ways humans manage to cooperate in such large groups is via shared stories, such as the story of the founding of Singapore as a small, resource poor, country with an intrepid leadership who taught meritocracy and harmony among people of different races and religions. Unfortunately, most of the stories about farmed animals that people hear and tell in Singapore and elsewhere propagate their subjugation. Thus, we need to tell different, animal-friendly stories.

A second force described by Harari is humanism, a view which he summarises as a belief that the ultimate determination of whether any act is right and wrong lies in whether that act makes people feel better. Vegan activists see this view when we explain to people that eating animal-based foods harms human health, the environment and our fellow animals. Unfortunately, while our explanation often elicits agreement from our listeners, too many people then add,  “But I love my meat.” How can we respond? Should we talk about the physiological and psychological benefits of altruism? Or, should we argue against humanism that people have an obligation to respect the rights of other animals whether or not animals suffering brings us pleasure?

Part Three of the book Homo Deus is titled Homo Sapiens Loses Control. In short, this title means that Homo sapiens will be supplanted by Homo Deus. Homo deus will constitute a new species who, thanks to bio-engineering, cyborg engineering and artificial intelligence, will render Homo sapiens an irrelevant waste of resources, except as we have value to the new master species.

As a book reviewer in The Guardian newspaper – https://www.theguardian.com/books/2016/aug/24/homo-deus-by-yuval-noah-harari-review –

Pigs unquestionably suffer when living in cramped conditions or forcibly separated from their young. If we think this suffering doesn’t count because it is not allied to a higher intelligence, then we are building a rod for our own backs. Soon the same will be true of us. And what price our suffering then?

In a similar vein, years ago, as part of our public outreach efforts, Vegetarian Society (Singapore), the predecessor of Centre for a Responsible Future, would use a statue of a fierce-looking alien and ask visitors to our exhibitions to do a thought experiment: “How would the visitors feel if aliens from far away in the Milky Way came to Earth, and these superior creatures developed a fancy for human flesh?” 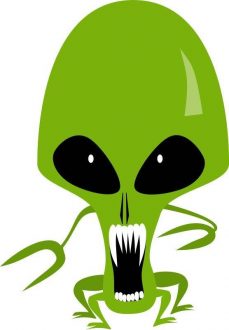 Homo Deus describes a possible world in which Homo sapiens are supplanted by a species, not from the far regions of outer space, but by a species that developed right under our eyes. Perhaps a version of our old thought experiment, a version that replaces the aliens with Homo deus, might help us Homo sapiens increase our empathy for the other animals with whom we should be sharing the planet. 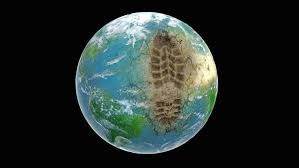 In the Anthropocene, humans’ footprint looms large on the Earth.

Photo of the misery of chickens on factory farms. 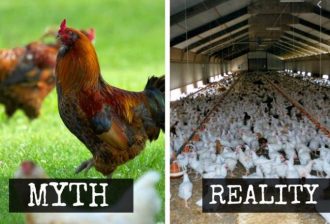