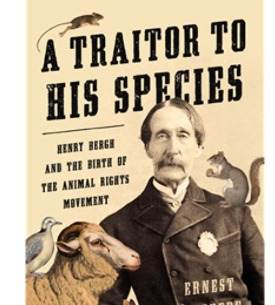 Ernest Freeberg is an American historian in 19th and 20th-century American culture, currently a Distinguished Humanities Professor and Departmental Chair of History at the University of Tennessee. He was previously the Lindsay Young Professor and then Beaman Professor.

Review of “A Traitor to His Species: Henry Bergh and the Birth of the Animal Rights Movement”  by Ernest Freeberg

Winston Churchill once stated, “Those who fail to learn from history are condemned to repeat it.” In that spirit, I was immediately attracted by the title of the book A Traitor to His Species: Henry Bergh and the Birth of the Animal Rights Movement by Ernest Freeberg, a professor of History at University of Tennessee, in the U.S. The book not only teaches much about the lives of people and other animals in the U.S. in the first 25 years after the end of the Civil War (1861-1865), it also gives us much to ponder about animal activism today in comparison with similar movements of about 150 years earlier.

While I highly recommend the book, two possible mistakes in the title should be corrected from the outset. First, Bergh and his colleagues were more involved in animal welfare than in animal rights. Their view was that animals should be free from unnecessary pain, not free from human exploitation. For example, the organization Bergh helped to found in 1866, the American Society for the Prevention of Cruelty to Animals (ASPCA), was probably most famous for their actions on behalf of the horses who served at the time as a key means of transportation of transport people and goods. The ASPCA did not oppose the use of horses for this purpose; their campaigns were about better conditions for the horses, such as regular rests, reduced loads, and no beatings. Bergh also led campaign against the long-distance transport to slaughterhouses of cows, pigs, and even turtles. For example, cows would be transported 1000s of kilometers from the central U.S. for slaughter in the eastern U.S., which was the more densely populated part of the country.

A second possible mistake in the title of A Traitor to His Species: Henry Bergh and the Birth of the Animal Rights Movement is that the animal welfare movement which Bergh championed was not born in the U.S. It had begun in 1824 or earlier in the U.K. Furthermore, non-Western, especially traditional, cultures often viewed nonhuman animals not as competitors to be conquered, but as fellow beings with whom to coexist (Keim, 2019). Perhaps, while learning from animal activists in earlier times, such as Bergh in the West, Churchill might also want us to learn from other cultures.

Bergh himself benefited from inherited wealth and had many connections among society’s upper crust. He had pursued a literary career, with little success, until his connections earned him a post at the U.S. embassy to Russia. There, he witnessed a driver savagely beating a horse. Bergh intervened, and in that act, he found his calling in life. Soon after, he left his diplomatic post, returning to the U.S. by way of England, where he visited leaders of the Royal Society for the Prevention of Cruelty to Animals.

In the U.S., the ASPCA struggled against obstacles familiar to today’s animal activists, the principal one being the anthropocentric view that humans, supposedly being the superior of the Earth’s creatures, have the right to do to other animals as we see fit. Even though back then, like today, many people were sympathetic to the plight of our fellow Earthlings, people’s own convenience, comfort, and economic benefit came first. As one newspaper editorialized, ´“He (Bergh) is right, without doubt, in trying to prevent cruelty to animals, but he sometimes seems to forget that to man was given dominion over the beasts of the field” (p. 216). On behalf of 19th century humans, perhaps, they had fewer alternatives than we currently enjoy.

The 19th century debate about the treatment of nonhuman animals bore a resemblance to the debate about slavery in the U.S. Frederick Douglas, a former slave who became a leader for the rights of Black people, is quoted in the book as saying on behalf of our fellow animals, “A horse is in many respects like a man.” It was only in 1863, three years before the ASPCA’s founding, that slavery was abolished in the U.S. Just as “traitor to your race” was an insult hurled at white people who opposed slavery, Bergh and his colleagues sometimes heard themselves called “traitors to your species.”

Another criticism of the SPCA claimed that caring about nonhuman animals contradicted caring for humans, a charge today’s animal activist may also hear. At the same time, the ASPCA’s animal welfare campaigns often enjoyed the support of government officials, law enforcement organizations, and wealthy individuals. Plus, Bergh and the ASPCA counsel founded the New York Society for the Prevention of Cruelty to Children. Bergh also campaigned for laws mandating flogging as the punishment for wife beating.

Nowadays, scientists provide animal activists a great deal of evidence for our view that other animals are so much more than objects. Even then, Louis Aggasiz, a natural history professor was called on to buttress SPCA’s case, such as about turtles. “I need not tell you,” the professor wrote in an open letter, “that men have always excuses enough to justify their wrong doings. So it was with the slave trade… so it is today with the turtle market” (p. 18).

Just as not all modern-day animal activists agree on tactics, so it also was in Bergh’s day. While he favored harsh physical punishment for animal abusers, others in the movement favored education. They distributed millions of posters, flyers, newspapers, and magazines, as well as developing materials for schools, including stories and songs. They also held essay contests and had a Band of Mercy Pledge. Additionally, the ASPCA promoted children’s literature, such as the novel Black Beauty, about a horse.

The book devotes different chapters to different forms of animal exploitation, such as dog and even rat fighting, and what the ASCPA did to oppose them. One chapter focuses on what was then a growing meat industry. Bergh did not practice a vegetarian diet, nor did he advocate for vegetarianism, although he had been horrified on visits to slaughterhouses and wished perhaps that humans had never started eating other animals. Advocating vegetarianism seemed to Bergh to be a lost cause, and he may have been right, given that even now only about 6% of Americans are full-time vegetarians or vegans (Vegetarian Resource Group, 2020).

Bergh passed away at age 74 in 1888 due to heart disease and bronchitis. The American Society for the Prevention of Cruelty to Animals still exists, and its website credits Bergh with founding it. In 2013, the New York City branch made an agreement with the local police to coordinate efforts, reminiscent of what Bergh and his colleagues had done 150+ years earlier.

In conclusion, another way that the efforts of Bergh and his ASPCA colleagues resonate today lies in the role of technology, rather than advocacy to reduce the suffering of our fellow animals. US cities seldom see horses pulling people not because people could no longer abide the suffering of horses or the stench of their manure and urine. Cars, not compassion, did the deed. Somewhat similarly, due to the invention of refrigeration, cows, pigs, etc. seldom endure journey of 1000s of kilometers to slaughterhouses. Instead, they are killed near the factory farms and their flesh is frozen, refrigerated, or otherwise processed for transport to faraway customers.

Churchill, quoted at the beginning of this review, not only studied history; he also predicted the future. One of his predictions from 1931 presaged what is under development today: making meat from a few cells of cows, chickens, fishes, etc., “We shall escape the absurdity of growing a whole chicken in order to eat the breast or wing, by growing these parts separately under a suitable medium.”