“Personalities on the Plate: The Lives & Minds of Animals We Eat” by Barbara J King, 2017, University of Chicago Press.

Personalities on Our Plates consists of eight chapters, each on a different group of nonhuman animals, starting with insects and arachnids, followed by octopuses, fishes, chickens, goats, cows, pigs, and chimpanzees. Please note that the order of the chapters corresponds with the order in which most people would rank the animals as to how smart and feeling they are, with the implication that if animals are smarter and feel more deeply, maybe we humans should think twice before eating them.

King explains that at least some humans eat all these animals, and she also explains why all of the animals, even the insects, can make a case that they should not be eaten. King is a retired Anthropology professor who writes and speaks in a way the general public can understand. Her TED Talk, Grief and Love in the Animal Kingdom, has more than 3 million views: https://www.ted.com/talks/barbara_j_king_grief_and_love_in_the_animal_kingdom?language=en#t-52954 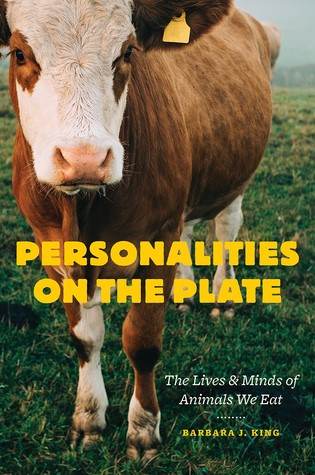 Perhaps surprisingly, King follows a mostly, but not completely, plant-based diet. She attributes her need to eat a little meat to an unnamed health issue. Nonetheless, her book and TED Talk deserve attention. Furthermore, King’s diet dilemma fits with a point she raises several times in the book: not everyone has much flexibility in their diet choices, particularly people living in extreme poverty. Earlier in her life, King was an example of what she calls humans’ “peculiar duality.” “Parents read their children bedtime stories starring sweet chicks or plucky pigs only hours after having served chicken or pork for dinner.”

Here are highlights from some of the chapters, starting with Chapter 1 about insects. If you think that it’s gross to eat insects, please know that many foods, even foods produced for consumption in the U.S., inadvertently contain insects. The U.S. government says peanut butter can contain thirty insect fragments per hundred grams, and chocolate can contain even more. In the Democratic Republic of the Congo, 64% of people’s protein consumption comes from insects.

Yet, just as evidence is pushing scientists to revise their views and see other nonhumans animals as capable of feeling and learning, King has found the same re-evaluation going on for insects, such as bees and crickets. She quotes the famous neurologist and naturalist Oliver Sacks as stating, “We often think of insects as tiny automata—robots with everything built-in and programmed. But it is increasingly evident that insects can remember, learn, think, and communicate in quite rich and unexpected ways. Much of this, doubtless, is built-in—but much, too, seems to depend on individual experience.”

Octopuses, the focus of Chapter 2, are incredible and incredibly underappreciated. King reminds us about the famous 2013 Youtube video in which a young child refuses to eat octopus because he wants to take care of animals, not kill them: https://freefromharm.org/animal-products-and-culture/i-like-them-to-stay-standing-up-why-luiz-antonio-wont-eat-animals/. 2020 saw another video about a human devoted to octopuses: My Octopus Teacher, on Netflix.

Another group of aquatic animals, the focus of Chapter 3, are the fishes. Many people will be surprised to learn that fishes vocalize to each other, as when minnow males growl in wooing a female or utter a knocking noise in fighting rivals. Haddock and cod make percussive noises when certain muscles drum against their swim bladders. One scientist, Culum Brown, estimates that as many as 50 percent of fish species “make some kind of meaningful noise for communication.”

A highlight of Chapter 4 is a story about how chickens worked with their human companion to save the life of a hen.

One day I was in my kitchen when I heard a tremendous hullabuloo amongst my feathered friends. They were screaming and crying so loudly that the birds in the trees started chiming in. The chickens rushed onto the deck, knocking furiously on the sliding door with their beaks. I ran outside immediately and they rushed off with me behind, trying to keep up. Straight to the pool we dashed. There I saw Cloudy, everyone’s favorite hen, flailing her wings in the swimming pool. I reached in and lifted her out. She was only very wet: saved by the fast thinking of her loving flock.

Another story from Chapter 4 must be told. That involves the exploits of Mr Henry Joy, a therapy chicken who loves his job at a nursing home, spreading joy among the residents.

Chapter 5 discusses the personalities of goats and tells a hopeful story of the role of farmed animal sanctuaries in providing a home for animals rescued from abusive situations. Before coming to the sanctuary, a group of goats had been the victims of horrendous abuse, but thanks to the kindness shown them at a sanctuary, were able to exhibit optimism.

Another hopeful story from a sanctuary enlivens Chapter 6, about cows. This story features two blind cows. Sweety had lived on a dairy farm, which meant repeated cycles of artificial insemination, nine months of pregnancy, and then her calves taken away immediately after birth. After eight years of this, when her value to the farm reached an end, good fortune intervened, and Sweety went to a sanctuary when Tricia, another blind cow, was living. Here’s what happened when they met.

It was amazing watching them meet, really just bringing Sweety into the barn and Tricia smelling the air, realizing there was a cow next to her. Sweety had the same reaction. They talked a great deal back and forth. … They quickly started eating from the same hay rack and checking each other out—awkwardly at first but by the end of the night they were licking each other. They became inseparable.

Pigs, the focus of Chapter 7, are probably the most chronicled of the animals whom we eat, with so many fantastic stories of their vibrant and lovable personalities. Maybe the most famous pig in this regard is Esther the Wonder Pig. Just check out the photo of the homepage of her website: https://www.estherthewonderpig.com/. Esther has influenced many people to testify that thinking of her made them give up pork.

The final chapter of Personalities on the Plate teaches us about chimpanzees. Most people already know about chimps’ intellectual and social lives, and researchers continue to astound us with further evidence, such as the fact that chimps of the Taï Forest in West Africa make use of 26 different types of tools, most of which they have improved to better fit their purposes. King shares the story of a mother chimp Ricci very patiently teaching her daughter Nina how to crack open coula nuts. After slowly demonstrating multiple times, Ricci, like a good teacher, retreats to observe Nina imperfectly persevering in applying what she had been taught.

To conclude, perhaps King’s main message is that, in their own varied ways, our fellow animals sense, learn, feel, and develop unique personalities. “Their lives matter to them, and they should matter to us too.”